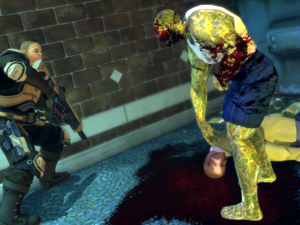 Zombies are the result of a Chryssalid's successful impregnation of a human victim with one of its eggs. If the Zombie is not killed within 3 turns of it standing up, the egg will mature into a junior Chryssalid and burst out of its host, killing it. The new alien will have full movement and the ability to immediately impregnate other victims.

Don't be fooled by the name - Zombies may be the slowest of the enemies you'll be up against, but they can still quickly close the distance to your soldiers to use their powerful melee attack that can poison an XCOM soldier on a successful hit. They are also deceptively durable, and can be tricky to kill with basic ballistic weaponry.