Warning: Major spoilers in this section.

In order to win the Mega-Primus War it will be necessary to fight the aliens at their own home. First X-COM will have to perform the necessary research in order to build craft capable of operating through the Dimensional Gates. Then it will be necessary to engage and survive the fleets of UFOs on the alien dimension in order for ground strike teams to destroy the alien buildings. The first trip to the Alien Dimension will unlock it as a research topic and after X-COM scientists complete that next step of research it will be possible to research the first building and proceed to the first tactical mission on the dimension. 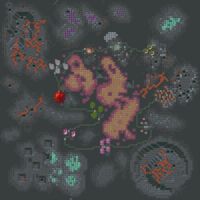 At the beginning of each week the game will add a certain number of UFOs to the Alien Dimension up to a certain maximum. This process can be stopped by destroying the Organic Factory.