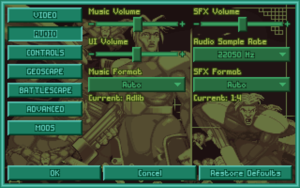 Music.rul File: With nightly builds, the ruleset has been broken out. Titled Music.rul, it resides in the data/Ruleset/Xcom1Ruleset/ folder. This ruleset allows for more music to be defined beyond the default game files.

"- type:" is both the track name used internally and the file name, if using mp3/ogg etc. GMGEO, GMTACTIC, and GMINTER can have multiple tracks defined with numerically sequential filenames, (e.g. GMGEO1, GMGEO2, GMGEO3 - etc - GMGEO99). (100 items maybe the limit). The engine will pick randomly from these.