Damage is a stat that determines the the amount of health points (HPs) that will be removed from a unit upon being hit by a shot from a weapon, an explosion or some specific abilities such as Mindfray or others.

There are essentially two different ways of calculating damage in the game:

Regarding weapons/items, each has a defined damage stat but the game uses two types of damage when performing calculations to determine the total damage inflicted upon a target: 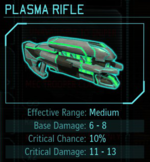 Random Damage only applies to firearms (conventional, laser and plasma) and can vary between -1 and +1 of the weapon's fixed Base Damage value for non-critical hits.

As an example, the Plasma Rifle on the right has a fixed value of 7 for its Base Damage, but this value randomly can vary between 6 and 8 damage upon hitting a target.

Regarding critical hits, Critical Damage can vary according to the following formula [1]:

Although this formula is the one used to display the Critical Damage numbers on the weapons info at the Barracks, during missions it isn't used due to a bug and the actual damage results are different than the displayed numbers. Instead of getting 3 possible results for Critical Damage, for instance the 11-13 listed for the Plasma Rifle, the game will only produce 2 results, with one having a 66% chance of occuring and the other a 33% chance. For a breakdown of the differences, see Weapons.

Damage Roulette is a Second Wave option that further increases the randomness of each weapon.

During tactical combat, the game will also give information about the weapon's Base Damage when pressing fire. The number displayed will be the maximum Base Damage possible.

On the Enemy Within DLC, the information about the weapons that can be seem at the Barracks is clearly incorrect for some weapons regarding their actual Critical Damage values due to a bug previously mentioned. Some examples are listed below:

Some class abilities or Foundry upgrades will increase/reduce the damage output of a unit or its weapon.

Also, there seems to be a Damage cap (at least for explosives) - Rocket Launchers will deal 16 max damage using HEAT Ammo and Mayhem (on vanilla EU), regardless of using Shredder rockets or not.