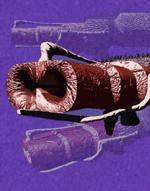 The devastator cannon is another step up the alien technology tree, packing even more firepower than the Disruptor Gun, while possessing greater range and accuracy. Used in one hand in aimed mode it is very deadly at long ranges, capable of killing unshielded foes in 2 or 3 hits, and shielded foes in 5 or 6. The other way to use Devastator cannons is to give a soldier two, on either full auto or snap shot firing modes, and having the soldier lay down covering fire, suppressive fire, or destroying terrain. In close combat this weapon is unrivaled in close combat, cutting through any alien in seconds. However, it is capable of cutting down unshielded soldiers in 2 or 3 hits, and very often critically wounding a soldier in only one hit. Its great accuracy makes this weapon exceptionally dangerous, especially when coupled with cloaking devices, as the aliens often do, and pouring fire onto an enemy who can't see you. Aliens with this gun should be your first priority targets until the missiles start appearing.

--X-COM:Turcocalypse 15:49, 20 April 2006 (PDT) This weapon is the God of the game.Period.A dozen rookies armed with twin devastators can be unleashed upon a Temple of Sirius for a messy and savage outcome.2-3 Well placed shots kill a Skeletoid or incapaticate a Psimorph

--UltimateKane99 - Do all and End all of the Apocalypse weapons. Tears through most materials like butter, and can crush Megaspawns like nothing if used properly. Makes the games very easy.