The Dimension Gate Generator is the tenth building of ten in the series of alien structures. 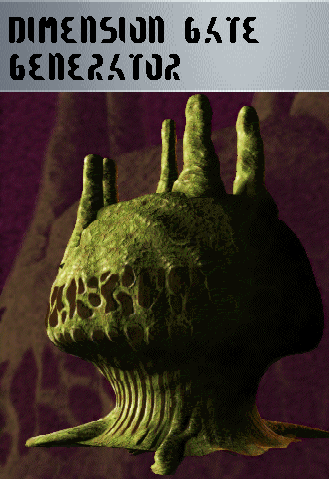 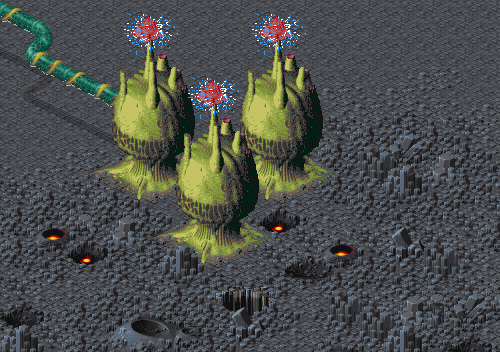 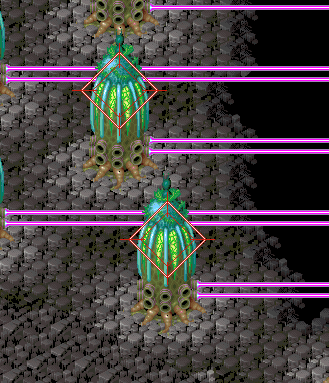 This is the final mission. Mission complete will end the game.

This building has one big black pit which contains the Alien Generators (shown left) at the cirumference. There are thirty-six 'plants' in total which are paired with one other. Destruction of one generator will automatically disable and destroy the other. The laser will then disappear for this pair. There are eighteen alien generators plants to destroy which are susceptable to explosives. Each plant will dentonate in a small explosion.

The alien battlescape is five levels high.
The whole battlescape is a pit with raised terrain at the perimeter. There is little to no cover. The whole area is built from simple grey rock which is not easily destroyed.
The generators are at a lower level which cannot be accessed by ground based troops. The bottom of the pit is level one and not a hole. The lasers cannot be walked through and do not 'zap' anyone close by. The perimeter surface terrain is plain with re-inforcement pads located at the battlescape corners. Hostile entities will only be found at this perimeter if not flying. There is no reason for access the lower level, so flying troops are not necessary.

Re-Inforcement Timer is 5 seconds.
Four locations. Four pads each located in the corners of the battlescape. They are green instead of the usual orange.
They are plain and featureless and are invunerable. To destroy the pads, the terrain underneath the four must be removed. This will cause a collapse of most, if not all, of the four green pads at this location. Any significant destruction will disable the spawner.
Remnants of the pad may remain suspended in the air in error since they were to be damage-proof.
Oddity: If the whole dimension is almost destroyed, where do re-inforcements come from?

The whole-game score will also be displayed.