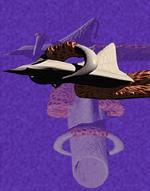 The Dimension Missile Launcher, image from the UFOpaedia

The dimension missile launcher is an alien device that launches the most powerful rocket in the game. It can easily take out 75%+ of an agent's shields, and with damage and area of effect very close to the vortex mine can take out a group of even the toughest enemies with only 2 or 3 missiles, with the possible exception of Megaspawns, who, by chance, happen to carry an extemely powerful missile that is not so different from the Dimension missile. It is probably the most dangerous weapon in the game if the AI can get a unit to start firing at you as well, simply because the sheer amount of explosive will tear your units apart. However, fortunately, this weapon works just as well for you as for the AI, and in the hands of a capable commander can turn the tide of a battle even when the xcom squad is severely outnumbered.