From UFOpaedia
Jump to navigation Jump to search
The printable version is no longer supported and may have rendering errors. Please update your browser bookmarks and please use the default browser print function instead. 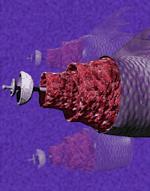 The Disruptor Gun, image from the UFOpaedia

After a few engagements with X-COM forces, the aliens realise that arming their Anthropods with actual weapons is a good idea. Their first attempt at this is the Disruptor Gun, a lightweight energy weapon powered by dimension chamber technology.

Unusually for an X-Com game, the Disruptor Gun is not really an improvement in firepower over the weapons X-COM can buy in Mega-Primus; its damage per shot is respectable but not amazing, its rate of fire and accuracy are mediocre at best, and it counts as a two-handed weapon for the purpose of dual-wielding. On the other hand, the Disruptor Gun is a quite convenient weapon for those uninterested in heavy micromanagement, as it's very light and doesn't require scarce ammunition (allowing standardisation of loadouts). In any case, the weapon should generally be researched with moderate priority, as unresearched artifacts cannot be sold in Apocalypse and the enormous quantities you'll loot from the aliens early on are worth a pretty penny; it's also a research prerequisite for the far more useful Devastator Cannon and X-COM Disruptor Armor.

Anthropods with this weapon are not especially dangerous except at point-blank range due to their laughably-bad accuracy, although Skeletoids pose at least some threat.

The aliens will eventually phase out the Disruptor Gun as X-COM's tactical score grows ever-higher. However, by that point, the weapon will have found its way into the hands of Mega-Primus organisations, who will continue using it indefinitely, so X-COM can never be locked out of the technology.

Official Entry: "The Disruptor Gun is a remarkable piece of technology. It propels a beam of sub-atomic particles at immense speeds and quantity. The chamber which generates the energy is an inter-dimensional device which materializes energy from an alternative dimension. The power source, once initiated, is self-perpetuating and no ammunition or energy pods are required to sustain the fire power. Our replicators can reproduce this technology fairly accurately."