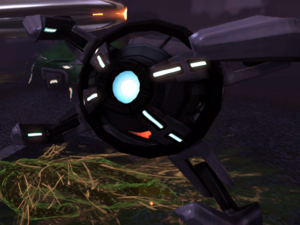 The Drone is a lightly armored flying robotic engineer with a weak ranged attack. Their main purpose within the Alien armada is to repair allied heavy robotic units in order to keep them gunning down your squad for as long as possible: it's an interesting anthropological (or rather, xenological) note that this is the only support unit in the alien collective, in contrast to an EXALT Medic or a Medic-specced XCOM Support soldier. Their threat is minimal after you've upgraded to Carapace Armor but they are almost always found with extremely deadly Cyberdiscs and Sectopods during combat.

In combat, they tend to wander in flight and make pot-shots at your troops, unless the mechanical unit they are grouped with is damaged. In which case, they will often stay close to the unit and make repairs for 3 HP with each use of their Repair ability: that's a prime opportunity to use explosives to damage them all, and if it's a Cyberdisc (or a Sectopod in the Enemy Within DLC), using their death animation explosion to further this damage will often destroy the drones, as well.

In Terror missions, they can be great annoyances due to their AI prioritizing shooting civilians even over repairing other mechanical units: this is slightly lessened in Enemy Within, where civilians have more than 1 hit point.

The Drone Capture Foundry upgrade for the Arc Throwers allows you to use them to hack Drone units essentially allowing you to add them to your squad for the rest of the mission. You can use them to repair your S.H.I.V.s (in the Enemy Within DLC, they can also repair MECs). They can also use a self-destruct ability in order to damage nearby units/terrain, not unlike a grenade. If they survive to the end of a mission, they will automatically do this: this may also harm anything nearby, so you may want to keep them away from soldiers and alien devices at that point.