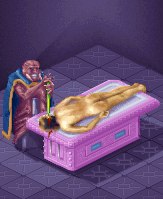 In the past many thousands of people have claimed to have been abducted by aliens, sometimes repeatedly. The truth is far more horrific. Humans are abducted, researched and monitored. The best specimens have genetic material extracted. Women have human-alien hybrid foetuses implanted, and then removed several months later. Who knows what sinister motives the aliens have?

This component is only found in an Abductor UFO on the ground floor in the central room. Contrary to its description, only the objects pictured to the right are set as an Examination Room - the special wall tiles surrounding the room are not. Each of these objects on the battlescape translates to one Exam Room back at base (for a 1:1 ratio) and sells for $9,000. Alien Medics carrying a plasma weapon guard these tables closely and errant shots may destroy them.