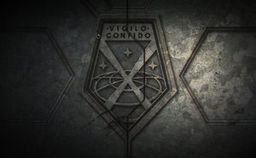 The XCOM Headquarters is made up of numerous facilities that are responsible for managing and supplementing the base's important strategic and research functions. The headquarters in Long War are mostly the same as in vanilla, with pretty much every facility performing the same or a similar function as in vanilla.

The XCOM Headquarters, often referred to as the "Ant Farm", due to it's side view, is separated in two sections. The top half of the base consists of static facilities that are already available at the start of the game and are the same for every individual game. The bottom half of the base starts out mostly empty, with room to construct various additional facilities, once enough space has been excavated.

The top half of the base contains several crucial facilities that are automatically available at the start of the game, and remain static throughout the game.

The static facilities supply a total of 30 power and require a total of 12 power, effectively supplying 18 power to the constructible facilities.

The bottom half of the base contains 28 sections, separated in 4 levels, where players can construct additional facilities. The middle section of each level is reserved for an Access Lift, leaving the remaining 24 sections available for the various other facilities.

Two sections contain steam vents. Thermo Generators can only be built in these 2 sections, though you can also build any other facility in these sections, with the exception of the Access Lift.

When needed, facilities can be built more quickly than normal, by selecting the option when building the facility. This increases the Credits, Alien Alloys and Elerium costs by 50% and adds 10 Meld to the cost, but halves the construction time.

One possible starting base

At the start of the campaign, the lower half of the base contains a single Access Lift in the middle of the top level, and a single Satellite Uplink directly left of the Access Lift. The rest of the sections contain either an open space (excavated areas and natural caves) or solid ground.

Facilities can only be constructed on sections with an open space. To construct a facility (other than an Access Lift), you must have an Access Lift on the same level, and have a connection to that Access Lift through open spaces. Open spaces that are separated from the Access Lift by solid ground are not available for the construction of new facilities.

Excavating a section takes 5 days, and the cost depends on the level the section is at. Excavations cannot be performed quickly, and do not have any maintenance once completed: 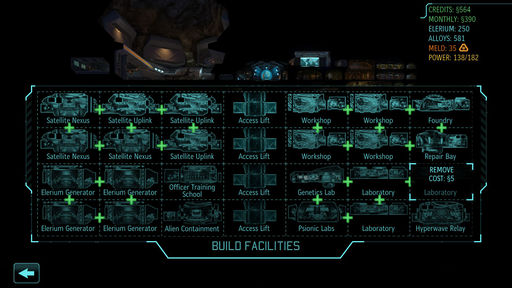 An example of end-game base layout.

Do note: the four quadrants are effectively interchangable-- save for that the OTS, Hypewave Relay, Foundry, and Gollop Chamber cannot be moved once their construction is complete, and moving Alien Containment will require euthanizing any captive aliens. And of course, you cannot remove Satellite facilities if doing so would reduce your capacity below however many you have up, nor remove power facilities below your current power requirement.

Players start with a Satellite Uplink directly left of the first Access Lift. Players that want to eventually have a satellite in orbit for each council member need a total of 16 satellites. The most efficient way of supporting this, is by building 3 Satellite Uplinks (3 maximum satellites) and 3 Satellite Nexuses (6 maximum satellites) in a 3x2 pattern for 7 adjacency bonuses (7 maximum satellites), which provides them with a total of 16 maximum satellites. This means that the entire top left quarter can be reserved for satellite support, while leaving room for a 2x2 Elerium Generator block. Alternatively, one could build the satellite hub as two facilities across, and three down, allowing non-adjacency facilities (such as the officer training school and alien containment) to be built vertically down the leftmost edge, which can be an attractive use of upper-space, if those facilities are a priority.

Steam vents can provide a great boost to power during the early months of the game, thanks to Thermo Generators, so the quarter that players reserve for their Power generators should contain at least one steam vent. It can be beneficial to restart the campaign until both steam vents are close to each other in the same quarter of the base, but keep in mind that Elerium Generators supply more power than Thermo Generators and do not have placement requirements, so steam vents can be ignored in the long run.

Steam vents are generally found at the bottom half of the base, which may take a while to expand to. Players should not hesitate to build Fission Generators at the top of the base during the early months, to provide enough supply for their early buildings, and then tear these down once there are enough Thermo Generators and Elerium Generators in place, as Fission Generators are very inefficient once players are getting tight for space.

With the top left quarter reserved for Satellite support and one of the bottom quarters reserved for Power generators, the remaining two quarters are available for Laboratories and Workshops. Players should reserve the top right quarter for the adjacency type they want to focus on during the early game, and reserve the remaining quarter at the bottom for the other adjacency type.

Alternatively, if players are reserving the bottom left quarter for Power generators, they could reserve vertical lines for their Laboratories and Workshops. While this is slightly less efficient for the adjacency bonuses, it allows players to build essential buildings of either type before expanding to the third level.

Players should keep in mind that they also need to reserve space for the Officer Training School, the Alien Containment, the Hyperwave Relay and the Gollop Chamber. These buildings have no adjacency type, and thus can be built in any quarter where players are not planning to use all 6 sections for the adjacency type. Thus, it may be ideal to 'reserve' two spots in the Lab quadrant for the Chamber and Hyperwave, as these are likely to be the last two facilities you will build, their spots can be taken up by two additional Labs in the meantime: you'll want the boost to research to complete as many projects as you can before preparing for the final act of the war anyways. Once all research is complete in endgame, it won't set you back anything to tear down two to make room for the Hyperwave and the Chamber.

If you go with a 2x4 configuration of the Foundry, the MEC Lab, and 6 Workshops (as recommended in Vanilla), you will end up with about a 46-48% refund in Elerium and Alloys from any builds in Engineering; this is fairly close to the listed 50% rebate maximum, and without crowding out the other facilities you'll be needing. Note that this does not include credits, so it is not quite "buy two get one free."

Since there are only 24 sections available, it helps to calculate beforehand how many Power generators players require. Keep in mind that the static facilities require 12 power and supply 30 power. For example, players may want to construct the following list of facilities:

These facilities together take up 19 sections, leaving 5 for Power generators, and require a total of 179 power. The static facilities supply 30 power, so an additional 149 power is required. The most efficient way of supplying this, is by building 4 Elerium Generators (140 power) in a 2x2 pattern for 4 adjacency bonuses (12 power), which provides them with a total of 152 supply.