A diferencia de los Sectoides, who can be very dangerous when accompanied by Cyberdiscs and/or a Sectoid Leader, Floaters are not particularly dangerous. Their main tactical advantage is their ability to fly - this can often make them more difficult to spot and also allows them to take up sniping positions on roofs and other high areas, although this is rarely done.

Floaters are perhaps the most common alien race you'll encounter throughout the game. 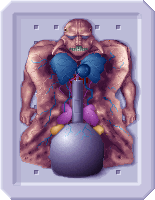