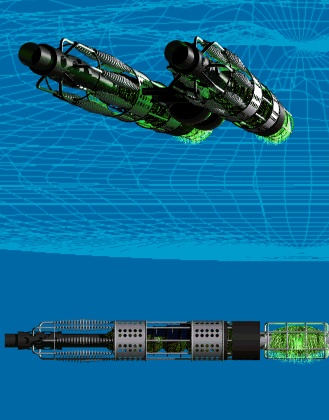 The Heavy Disruptor Beam, image from the UFOpaedia

This is the ultimate aircraft weapon in the game. It has double the firepower, range and size of the Medium Disruptor Beam, allowing it take down large UFOs easily. As with other disruptor weapons, it has an infinite ammunition supply.

Its large space requirements of 4×4 slots means that it can only be armed on the Annihilator's forward weapon mount. No other ship is capable of arming it.

Being the most destructive aircraft weapon, it is also one of the most dangerous weapons to use while fighting UFOs in Mega-Primus as long ranged attacks are highly prone to missing their marks, and any misfired shot will level any building in a single shot. It is in its element in the Alien Dimension as you can be as destructive as you like. The extreme range of the Heavy Disruptor Beam is best utilized while under manual vehicle control or when the Annihilator is hovering in the air at a great distance from its target.

This weapon is recovered from capital class UFOs such as the (Type 9) Alien Battleship and (Type 10) Alien Mothership.

"The Heavy Dispruptor[sic] Beam is an immensely powerful weapon. Its only drawbacks are its size and difficulty of manufacture. The energy chamber is enormous, drawing energy from another dimension. It is possible that the weapon's original power source is actually located in some alternative dimension."