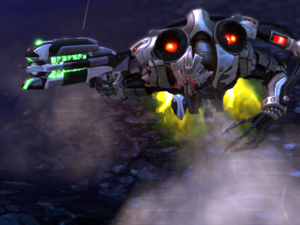 Tough. Accurate. Mobile. Deadly. Heavy Floaters are hulking monsters, with a ton of health and a powerful degree of firepower to match. Flank attacks from these hovering horrors usually end in a tough fight and a lot of corpses. If these corpses turn out to belong to the Aliens or XCOM soldiers is up to the XCOM Commander and a little bit of luck.

While ordinary Floaters may seem dumb or reckless and are easily dealt with, these larger counterparts are smarter, tougher to kill and will coordinate their attacks better against your soldiers. At higher difficulty levels these aliens are addicted to using alien grenades to blow up your soldiers' cover. And if your units are behind indestructible cover they'll just keep lobbying grenades, so be aware.