The Incubator Chamber is the fifth building of ten in the series of alien structures. 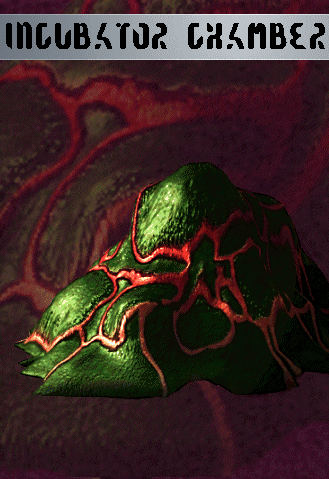 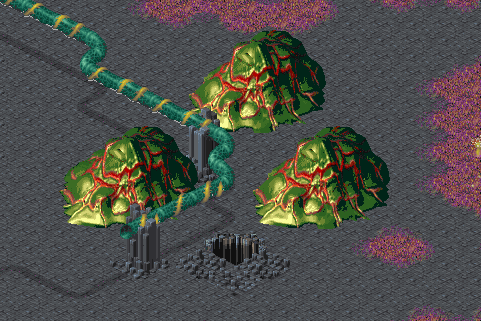 This building has two areas which contain the Alien Egg pods (shown left). There are fourteen incubators in total which are resistant to damage. Destruction of a pod will cause an small explosion with thick smoke and, if using strong explosives in certain areas, may collapse an overhead walkway which, with the stun gas type yellow-barrel plants (shown left also), is designed injure a stunned entity.

The alien battlescape is seven levels high.
A simple maze of stone embedded corridors and large piping utilizing the full height of the battlescape to limit an ambush by providing many sniper positions. Other areas use the common layout present in all alien buildings.
The objectives at one location are spread about in a level-one corridor system with single pods located in their own small room. This multi-leveled battlescape segment does not have a roof allowing easy destruction of the pods from elevated areas. A side-by-side re-inforcement point is present at the southern (overhead view) area which overlooks these alien egg pods. As an open area, Skeletoids with Dimension Missile Launchers pose a deadly threat since there are so many.
The objectives at the other location are underneath an elevated corridor and orange pad device. Access is only via a grav-lift. Destruction of the pods with strong explosives may detonate the barrel plants also which releases a large (8 cell radius) stun gas cloud and causes collapse the overhead walkway. This combination is a trap to injure or kill unconscious agents by falling debris.
Bone doors are present and working as normal architecture.

Re-Inforcement Timer is 20 seconds.
Three locations. Ten pads in total.
Two pads are located in an elevated walkway overlooking the alien egg pods allows long range fire from cloaked units.
Four pads in another area with cross-fashion stone corridor with four pads at the intersection designed for strong protection of the objective underneath. These orange pads are positioned to limit ambush and are ideal for long range weapons fire. The corridors are suspended above the ground and may be accidently destroyed by explosives. If the corridors collapse and access to the grav-lift is lost, any ground based agents underneath will become isolated. Other methods to free these agents must be used since exit tiles are not immediately available.
Four pads in the final area are located at level one with a brown rock structure above. An integral grav-lift allows quick escape upwards for ground units.