Difference between revisions of "Lightning" 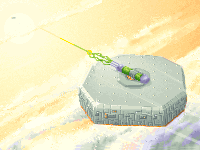 The prototype X-Com fighter/transporter, the Lightning is the second UFO-based craft developed by R&D, with the emphasis on troop transport capabilities.

The Lightning is your typical 'Jack of all trades, master of none'. It neither excels at being an interceptor nor does it excel at being a troop transporter. Either role can be better filled with other aircraft, such as Interceptors or Skyrangers, but the Lightning is a meld of both.

As an interceptor, it fails by having a short range. As a transporter, it is unable to carry Heavy Weapons Platforms. These are the main reasons why a number of X-COM Commanders frown on the usage of the Lightning.

However, unlike the Skyranger or the Avenger, the Lightning does offer a completely unique experience when it comes to ground combat because of its peculiar octagonal design. Due to an unusual design flaw, troops are able to leave from four other locations apart from the official entrance. These additional exits are found on the corners of the ship.

With a combination of well trained soldiers, adequate equipment and strategy, the ability to deploy from almost every direction can prove to be very advantageous in many different situations. However, as the Lightning lacks the ability to transport Heavy Weapons Platforms, only X-COM Commanders that are confident in the abilities of their squads to survive without HWPs may wish to make use of the Lightning.

As the Lightning is designed to carry troops, it lacks the acceleration of the Firestorm. This means that even though it can stay in the air for almost as long as a Firestorm, it cannot fly very far. This does not necessarily render the Lightning useless. Though its range is limited, its acceleration still outclasses every other earth based aircraft available, making it excellent for rapid short range interceptions and ground assaults.

Whilst its primary role is that of troop transporter, unlike the Skyranger it has a single aircraft weapons hardpoint.

The Lightning also has much heavier armour and hull strength than the Firestorm and is second only to the Avenger in terms of its ability to sustain damage. Although it may not be destroyed completely by a single attack from a Battleship, the odds of a lone Lightning surviving an attack against a Battleship are substantially smaller than that of the Avenger.

The Lightning, for all its advantages and disadvantages, is best used as support for other ships with a more dedicated role rather to be relied on by itself. EXTRA: If you need rapid response times and don't have the Avenger, this craft can shuttle back and forth between all those landed alien craft who are building an Alien base. Grab that Elerium quick.

The "Lightning" craft is fuelled by Elerium-115. Before manufacturing this craft, ensure that you have sufficient stocks of Elerium in your general stores.

One Lightning requires 6 units of Elerium for refuelling. When refuelling, the Firestorm receives 16% more fuel (i.e., 1 Elerium) every half hour, on the half hour. So it can take up to three hours to refuel, and will be finished fuelling precisely on the turn of a half hour.

Lightnings are repaired at the rate of 3% damage per day.