The Megapod Chamber is the ninth building of ten in the series of alien structures. 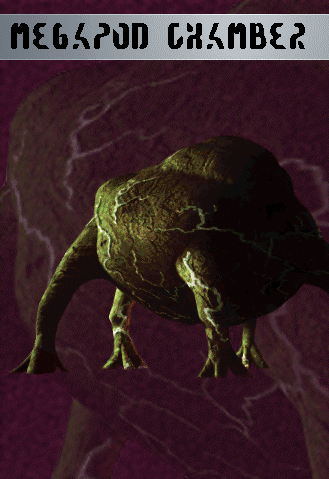 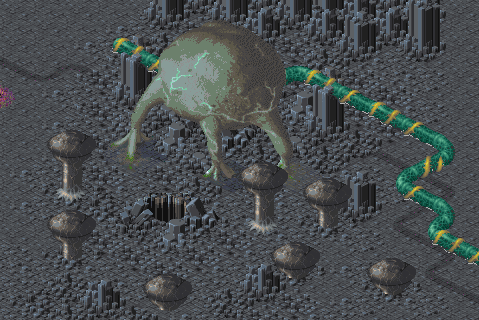 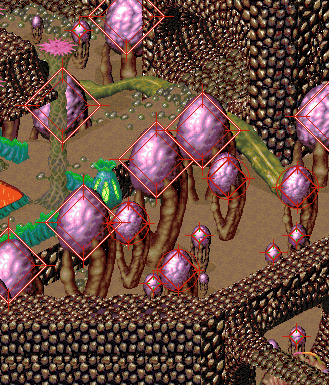 This building has three areas which contain the pods (shown left). There are forty-two pink pod objectives in total which are not resistant to damage. Destruction of a megapod plant will cause a small explosion. The egg-like objects are numerous and close to others - a chain-reaction detonation is possible.
The large plants are the target however being explosive and packed closely together, all pink plants (111 in total) may be destroyed.

The alien battlescape is five levels high.
There are green 'smoke' plants scattered about. There are three locations which contain the megapod plants, two being within brown rock enclosures and the last within a large structure built from 'balls'. All three locations are defended with working turrets.
One area is a small brown-rock room with no roof, with access ramps north and south and a single orange pad outside with a biological mesh-like growth. The enclosure contains ten objectives, fifteen minor pods and four turrets.This small room is easily cleared with one large explosive thrown from outside. An agent may become trapped if inside and the ramps are removed.
The next area is a large brown-rock room with no roof, with access ramps north and south externally and some internally from the middle walkway which disects the room in an east-west orientation. Any access ramp is easily damaged which may trap a ground-based agent. There are sixteen turrets mounted within the walls, aimed outwards. Each side contains seven objectives with the right (east) side containing forty small pods and the left (west) having fourty-three. The central walkway has a single orange pad with four weak 'pink tube' growths next to four explosive plants. Any explosion may destroy all the target plants. The external section contains an orange pad each.
The final megapod room appears as if built from 'balls'. There are two access points with one defended with two turrets ouside. The roof is very weak and can easily destroy the contents below. Four turrets on pedestals overlooks the cluster of orange pads in the centre with four explosive plants placed nearby. Any explosive detonated inside will typically destroy all fifteen objectives, thirteen small megapod plants, the four inside turrets and orange pads.
The unique locations and megaspawns with their dimension missiles are designed to kill any entity stuck in the room when plants start popping off.

Re-Inforcement Timer is 10 seconds.
Four locations unique to the Megapod Chamber. Eight pads in total.
Any megapod plants near exploding orange pads may also explode and cause a chain-reaction of detonating plants until nothing remains.