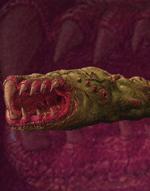 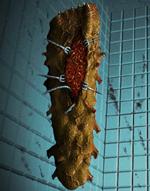 This is one of the first units you will meet. It can be dangerous, as it does spit a weak acid at you, but it's main advantage is that when you kill it, more often than not, it spawns four Hyperworms, which can be a bit of a pickle for your troops to shoot all four before your troops get critically injured. Otherwise, a weak, slow-moving unit which is pretty weak if faced by two or more guys. It's just those darn hyperworms you gotta watch out for...

For capturing one alive, I suggest stun grapples. Heck, unless I was trying to capture an alien in a bottleneck area such as a ship's doors, I don't think I ever used anything other than stun grapples. Get in close enough, and then just fire until you can't fire anymore. Leave one person to watch the multiworm, so that your man shoots it the moment it wakes up. Otherwise, they are pretty easy to capture.

Official Entry (Captured Alive): "The Multiworm is clearly a crucial stage in the complex Alien life cycle. It is capable of attacking by propelling a fluid from pores along the side of the body containing a complex mix of micro-organisms that use enzymes and acids to break down the molecular structure of the target. Fortunately the range of the propellant is fairly short. The Multiworm is slow moving, but care should be taken in combat because it may release its offspring in the throes of death, creating an even greater threat."

Official Entry (Autopsy): "This creature is a rapacious carnivore whose feeding frenzy contributes to the rapid growth of younger lifeforms called "Hyperworms" which are reared inside its body. The gestation period for the Hyperworms is about three days and each Multiworm gives birth to four offspring. The birth process is lethal for the parent - the Hyperworms explode from the Multiworms body and consume it within a matter of seconds. The brain structure of the Multiworm is undeveloped and it is unlikely to be affected by Psionic attacks. The tissue analysis from the autopsy will provide an invaluable contribution to our biological warfare research."