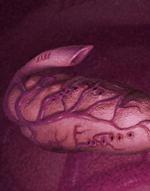 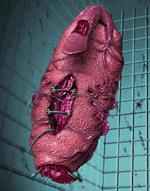 The Multiworm egg is the first step of the Multiworm life cycle. They are immobile pink sacs with a tube that spit acid at nearby enemy targets. If avoided, they are harmless and are automatically collected at the end of the battle.

Official Entry (Captured Alive): "The gestation period for a Multiworm is approximately two days. During this time the egg will protect itself with a weapon that launches a fluid containing micro-organisms. These organisms consist of various types, some containing acids designed to erode metallic compounds and others containing unusual enzymes that rapidly break down organic matter. Fortunately the range of this weapon is limited. The Alien embryos are not sufficiently advanced to be susceptible to Psionic attacks."

Official Entry (Autopsy): "A large worm-like creature quickly develops inside the protective skin of the Alien egg. This worm appears to contain the embryos of a further four life forms. We cannot tell how the next stage in the life cycle develops from the autopsy results, but the tissues will be useful for our toxicology research."