Difference between revisions of "Muton"

Despite their greater survivability, Muton reactions give them only a medium level of aggression; less than Sectoids and Ethereals, but more than Floaters. They tend to engage in concealed sniping a bit more than most species, which arguably makes them more dangerous than their health or armour does. They become comic relief for a player with lots of psionics, but should be approached cautiously otherwise. Heavy plasma is the preferred weapon class for use against them; while laser rifles will work, many more rounds per kill will be required, which allows them time to return fire. 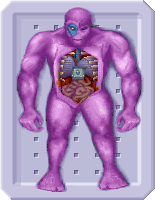