For the version that appears in The Bureau, see Outsider (Bureau) 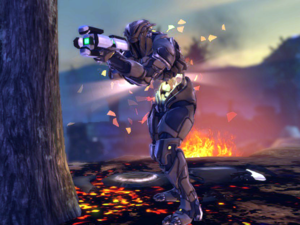 Beings of pure energy, Outsiders command UFOs for the alien forces. Although they possess no truly special abilities in tactical combat, capturing an Outsider is required in order to progress further in the storyline. They are only found on UFO assault missions (crashed or landed) and disappear from the campaign after the alien base is assaulted.

Outsiders can be easy to deal with but if you unexpectedly activate them during the early game (through a misstep or a UFO wall getting blown) their Light Plasma Rifles can be very deadly due to the Outsiders high Aim stat and their tendency to rush and attack immediately any intruders. Keep also in mind that on Impossible difficulty level they have a bonus movement.

Outsiders will disintegrate after dying in the battlefield. Capturing one alive with the Arc Thrower results in the retrieval of an Outsider Shard which reveals their true role.