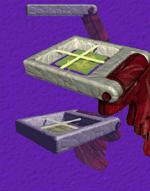 The Personal Cloaking Field has a hidden property of making the target MUCH harder to hit, even when the cloak is revealed. Trained agents will start shooting worse than rookies when directed against a cloaked target, and aliens will make notably worse shots against cloaked agents as well -> Agents with 70 accuracy will have problems hitting cloaked targets even at point blank range, which is ridiculous considering that even 20 accuracy is usually good enough to reach 100% hitrate on autofire with a machinegun when at point blank range. One exploit around this is to shoot behind the target, which will use the agent's normal accuracy.