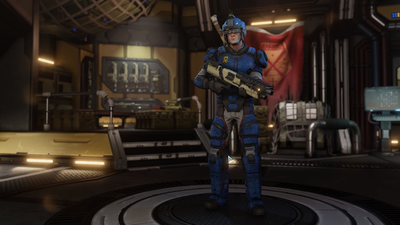 "The Ranger serves as our primary reconnaissance unit, capable of moving independently in concealment while engaging enemies at close range using extensive training in swordsmanship."

The Rangers skill tree allows focus in, or mixing of, two distinct roles. Either the Ranger is a close-range damage-dealer, or a stealthy scouting class. They are the only class capable of remaining concealed for a large amount of a mission, and wielding powerful shotgun-class weapons, which have significantly less penalty for range than in the previous game.

The Rangers Scout path focuses on improving their ability to use Concealment, with Phantom allowing an Ranger to potentially remain stealth through the entire mission, which can help in long missions by preventing the squad from being surprised by enemy pods. Conceal allows the Ranger to enter stealth even on normally exposed missions, or to return themselves to their concealed state after launching an ambush. In combat skills, the Scout path offers abilities that suit a lone-wolf, flanking combat style, with Implacable allowing the soldier to reposition after exposing themselves for a flank.

Their Assault path pursues more blade-focused abilities and a proficiency in being a very aggressive up-front attacker. Key abilities improve the Ranger's sword abilities, and allow them to ignore overwatch shots that would prevent them from engaging, with Bladestorm serving as a counter to any melee-based aliens. Untouchable provides a degree of safety from the retaliation to their aggressive behaviour, and Reaper can allow the Ranger to perform cleanup on softened enemy pods.

Rangers frequently embody the concept of high-risk, high-reward, capable of exceptional, reliable damage, at the cost of exposing themselves.

Commanders should consider the dangers of having a single unit advance mid-combat, for instance, to perform a melee strike. Ending your turn by having a Ranger slash the final enemy of a pod can unintentionally grab the attention of a nearby pod, which will then have a full turn to attack the possibly-exposed Ranger.

The shotgun is often a far superior option to the blade if Run and Gun is up, or the target can be closed on with a single move, due to its high point-blank aim bonus, higher potential damage and possible attachment procs.

Merely taking the Phantom and Conceal abilities can allow a primarily Assault-based Ranger to fulfil the role of a scout.

A Perception PCS will also apply to a Rangers Slash ability, reducing or removing the likelihood of missing a crucial melee attack.

The benefits of Shadowstrike will apply to attacks initiated on enemies without Line-Of-Sight to the Ranger, which can be performed with any ally spotting for the Ranger.

Shotgun-using Rangers will often be the best target for your Laser Sight attachments, as they increase in potency the closer their user is to their target. With the right combination of flanks, range, and attachment, Rangers can hit 100% critical chance.

Despite its wording, Untouchable can be refreshed by killing the enemy on the alien's turn, with overwatch or Bladestorm.