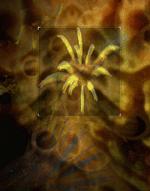 The Real Alien Threat, from the UFOpaedia entry.

This is the true reason for the invasion. The Micronoid Aggregate puddle-o'-goo is the real reason behind the alien invasion. It's a parasite which practically takes away all control of the host from themselves. (Think Go'auld from Stargate SG-1) This allows the Micronoid to turn their own allies against each other, specifically through the Brainsucker, which implants the Micronoid Aggregate into the blood stream. The Aggregate uses psionics to maintain control over its vast intelligence, and is a kind of hive. So in a way, you can make a parallel to the Borg and the Go'auld. Nice combo. This allows for the creation of Toxin C, the most POWERFUL toxin in the game! Yes! This is exactly what you've all been waiting for... except that you have to research EVERYTHING in order to get it, just short of the Queenspawn and the Overspawn. The requirements, in full, are as follows:Anthropod & Anthropod Autopsy & Spitter & Spitter Autopsy & Skeletoid & Skeletoid Autopsy & Popper & Popper Autopsy & Megaspawn & Megaspawn Autopsy & Micronoid & Micronoid Autopsy & Psimorph & Psimorph Autopsy. Finally! Naturally, you will need to have researched Toxin B before getting Toxin C.

Official Entry: "It is now clear to us that the Micronoid organisms are the source of the Alien intelligence and they are using the various Alien forms to initiate an assault on our dimension. The large Alien life forms cannot survive in our dimension - the Micronoids must transfer to a new host in order to conquer our world and the ideal host is our own race. Brainsuckers are used to introduce Micronoids into the human bloodstream which then gain control of the brain and have access to all the knowledge and abilities of the host. We now understand the physiology of the Micronoids sufficiently in order to develop a specific toxin that will kill the organisms in the bloodstream."