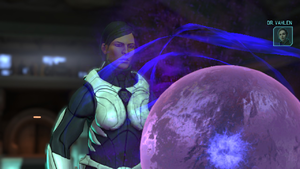 Volunteer about to enter the Gollop Chamber 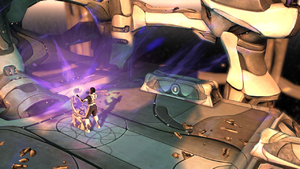 Volunteer on the Temple Ship's bridge

After the Volunteer uses the Psi Link, the final mission will become available but the player won't be able to complete any more Research, although it will still be able to build items to undertake the Temple Ship assault. The Volunteer will immediately progress to maximum Psionic rank, so the player will be able to finish leveling up the Volunteer's Psionic abilities on the mission loadout screen if not already a Psi Operative.

During the mission the Volunteer must be kept alive during the entire mission until its end, where he/she will make the ultimate sacrifice to stop the alien invasion and save mankind.

The Fate of the Volunteer

According to a tweet ([1]) made by the lead designer, Jake Solomon, "The Volunteer, does NOT die at the end of the game." Another tweet added a little more detail: "Everybody assumes that the soldier dies, but actually, they disappear before the Temple Ship explodes. I'm not sure anyone got that."

While this leaves open the ultimate fate of the Volunteer and the possibility that the character may return in a sequel, Solomon dispelled the rumors in a latter tweet that: "To be crystal clear, I'm not hinting at anything with this, just wanted to share that your Volunteers are alive. They did good.