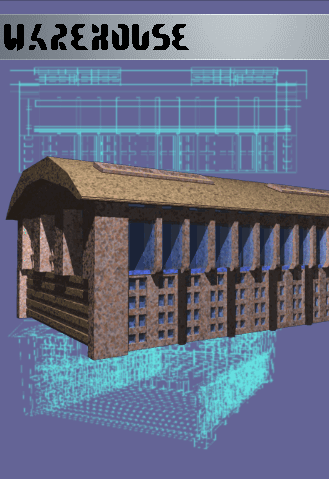 Prefer flying agents. A nine-level small battlescape which is either one map segment for a small population or double east-west for anything larger. It does not get larger than this which makes it a quick engagement of hostiles. The area around the exit tiles (four in total irrelevant of battlescape size) can be destoyed with explosives or sword to trap everyone which cannot fly. If the middle wall has doors, these can be isolated in the same method to seperate the hostile forces. A divider wall at the lowest levels disects the double sized battlescape which allows clearing out one section before moving to the other. A wooden floor is common and can be removed to expose the lower levels without having to use the grav-lifts. Any storage crates located in the central area of the middle floor are explosive and destroy the floor. Beware of falling crates! The upper level usually contains walkways. These can be cut to limit hostile movements also. Flammable floors and wooden crates!!