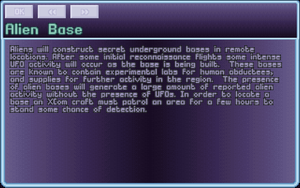 Aliens will construct secret underground bases in remote locations. After some initial reconnaissance flights some intense UFO activity will occur as the base is being built. These bases are known to contain experimental labs for human abductees, and supplies for further activity in the region. The presence of Alien bases will generate a large amount of reported Alien activity without the presence of UFOs. In order to locate a base, an X-COM craft must patrol an area for a few hours to stand some chance of detection. An Alien Base Assault will remove the threat but should never be taken lightly.

If successful the aliens will score 50 points, and an extra 5 points per day which is eventually subtracted from your score. Alien Bases add significantly to the Alien score when they are constructed and between that and the much higher UFO activity present will have neighbouring countries in particular very agitated, possibly leading to them reducing or withdrawing funding. As such Alien Bases in key areas will need to be dealt with somehow, while Bases in remote locations might well not be so critical to target for action immediately.