THIS PAGE IS UNDER CONSTRUCTION - CHECK BACK LATER

This introductory guide assumes you have never seen an X-COM game before, but you can still do basic things like or open and close menus without having to be told how. If you get lost in the various interfaces - guess. It's OK.

This isn't a step-by-step tutorial, and you won't mess it up if you do something out of order. X-COM is all about open sandbox-style freedom.

Start a new game and choose your difficulty, choose Beginner. 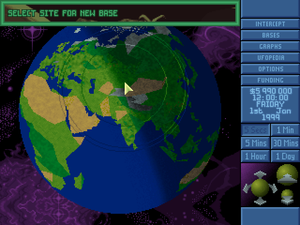 Placing your first base

You can either pan the globe around with the controls in the box at the bottom right, by using arrow-keys, or by right-clicking anywhere on the globe to center on that location.

Now you pick where you want your first base. Look at the Radar coverage circles and the landmass within them - it's good to start out covering countries that give X-COM a lot of funding so either US and Canada or Europe are good options. It's not really important however, you could even put your first base in Antarctica and that would be OK too. #images

You can name your base whatever you want, or even no name at all, as long as it fits in the box. You can also change the name as often as you like.

Interception brings up a list of crafts you control. Selecting a craft will allow you to give that craft orders - more on that later. You can also select craft by clicking on their home base.

Bases is covered in the next section. If you've turned on the custom base layout option then you would already be here, placing your base facilities.

Graphs provide a lot of statistical information that might look completely meaningless to you, don't worry about it. It's there for when you want it later.

Ufopedia might sound familiar, www.ufopaedia.org is not a coincidence. It's an in-game encyclopedia that will grow as you experience more of the game. Feel free to browse but don't be surprised if you don't understand the purpose of anything in there yet. 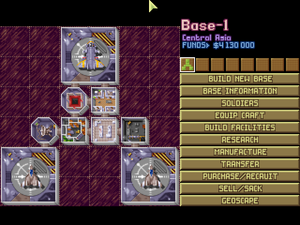 After pressing Bases in Geoscape screen you'll will get to Basescape screen.

After some time of observation your radars will spot an UFO. You'll need bring down this aircraft with your interceptors.

When UFO shot down and crashed on the ground, send your Skyranger with troops to crash site.