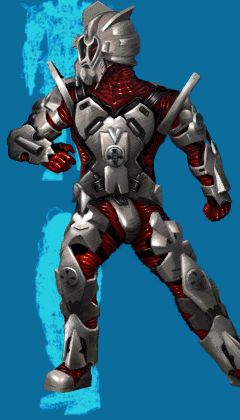 Megapol Armor is available in Apocalypse from the beginning. Of the three armor types, it's mid-range in terms of protection and slows your agents the most due to its weight. It is mostly used because it's so readily available in large quantities and cheaper than Marsec Armor.

Hybrid agents will find themselves burdened by the armor's extreme weight due to their low strength. For them, Marsec Armor offers respectable protection while being much lighter for use.

In battle Megapol Armor is very good against all but the most powerful human tech, and agents will rarely find themselves injured except when the armor is worn down. It is capable of weathering several attacks from early alien weapons and the Disruptor Gun with minor injury. This changes when Poppers and Devastator Cannons show up, as they'll deal heavy damage from the first hit and agents will quickly require Shields for protection.

Later on the game when X-COM Disruptor Armor is deployed this armor will be obsolete for frontline duty, but it will still be useful for garrison soldiers.

Interestingly, Megapol officers do not wear this armor.