Just to point out, in TFTD, this happens a LOT with the Triton and the aliens will make every attempt to shoot through the Triton via these gaps in the game's colision detection.

A X-Com UFO example would be the Lightning. But the Lightning compounds matters by having walls that don't ignore collision detection, so it won't stop bullets from flying into it.

I've just seen something this happen inside a base. My flying scout could see into most of the upper control room, at the same level as him, through what appeared to be several squares of solid earth.

Maybe the programmers just forgot to detail the characteristics of the terrain on the upper level.

I've noticed this myself with UFOs under these conditions:

On Medium/Large scouts (one level) if I have someone in a flying suit on level 1 approaching diagonally to one of the corners when they get within about 6-8 squares away the inside of the UFO is suddenly revealed, including spotting aliens inside!

On Adbductors you can see through the diagonal corner sections, but this is limited.

On Battleships it is possible to see deeply into much of the vessel, although I'm not fully sure which angle/level you have to approach from to do this.

I have noticed that if you stand next to a wall (either interior or exterior) and turn your soldier you can see specific squares inside exactly 2 squares in front of the soldier's facing.

External UFO Windows (in my experience) DO NOT ALLOW YOU TO SEE INSIDE. I have never been able to see more using an external window than from 'looking through' normal walls etc.

My theory is that if you approach from a different level of the map there is a 'gap' between the wall and the ceiling that the game engine allows you to see through. My experiences with Battleships give me cause to believe that this can also work from below, as well as above. --Hot Logic 19:53, 1 November 2006 (PST)

I think it has something to do with the diagonal squares which are half inside the ufo, half outside. Those squares are also susceptible to destruction in mountains or something.

Windows are not needed to see between the northwest diagonal wall and the object-walls to its northeast and southeast. I think what's happening is that LoS is traced as a discrete line in voxelspace, so it is possible to see aliens through them (due southeast) under specialized circumstances.

In this case, in vivo testing was done with a Floater facing south. The powerplant had exploded on this mission. (as a Retaliation UFO, there was no way to ground-assault it; it had to be shot down.)

We also know that south-facing due southeast line of sight works (at least when three to five squares northwest of the alien), while east-facing due southeast line of sight does not work. This should be enough to strongly constrain the x-y position of the line-of-sight origin and line-of-sight destination voxels. --Zaimoni 13:30, 13 Oct 2007 (CDT)

Zai, it might be too much trouble, but I for one would appreciate a screenshot, so as to make the situation clear. Not only to be sure of the relative placement, but also because e.g. MapView (and perhaps others) have called directions in ways I never expected. A picture makes everything clear. If you're using the DOS version, I have trouble taking screencaps when using DosBox full screen, but if I window it, I can then screencap that (and crop the screencap to the XCOM window). - MikeTheRed 19:05, 17 October 2007 (PDT)

I thought about that...twenty-four hours or so after I overwrote the affected savegame. I'm using CE, which means I have these *.tga screenshots which almost none of my programs know what to do with. Recall that the internal facings are 0 (north) through 7 (northwest). There is only one northwest wall of a Medium Scout; it is the diagonal wall running southwest-northeast that is "highest" when drawn by the game. The two lines of sight being analyzed (which behave identically) are passing due southeast ("straight down the diagonal") through one of the squares north, or west, of the northwest wall. --Zaimoni 21:56, 17 Oct 2007 (CDT)

Cool. It's interesting that you've been able to relate your findings to voxels as well as shot penetration! - MikeTheRed 19:52, 17 October 2007 (PDT)

Well, the LOFTEMPS.DAT file pretty much makes tying in voxelspace essential. Analyzing this case will be generally useful, because there's a lot of this general type (diagonal line of sight through two empty squares threading two blocking squares).

Notable exceptions include the Large Scout UFO. The problems with Frozen Alien Syndrome there may very well have to do with these phantom lines of sight not existing for that UFO. --Zaimoni 22:39, 17 Oct 2007 (CDT)

How do you take a screenshot during X-COM? (My PrintScreen attempts come out horribly mangled.) I just found a rather striking example of the window see-through bug while setting up a UFO Exit Ambush on an Ethereal Supply Ship and think it'd be useful to the article. Arrow Quivershaft 15:19, 20 October 2007 (PDT)

You did what I said? Flip out to windows and then Printscreen. - MikeTheRed

All the pictures I try that with come out horribly mangled; colors distorted, a good portion of the picture rendered in black, etc. I thought there was a button for in-game screencaps from the X-COM program itself. Arrow Quivershaft 15:37, 20 October 2007 (PDT)

Printscreen will probably only work with the dos version. Dosbox has a image capture function too. For the collectors edition, use F12. The screenshots will be saved as TGA files in your game directory at a width and height of the game's native resolution of 320x200. Open up the images in whatever image manipulation utility you may have and save it as a PNG or Jpeg for uploading. The PNGs made for the phasing through solid objects on different levels demonstration were amazingly smaller than I expected them to be, so they're quite ideal. -NKF 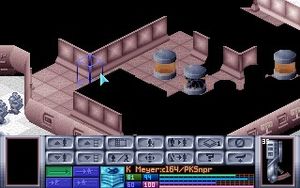 Here we are. Somehow, the colors got distorted, but I think you get the idea; one of the kneeling soldiers is seeing into the UFO somehow; during the alien turn, I could see an ethereal wandering about in the visible area. Arrow Quivershaft 15:49, 20 October 2007 (PDT) 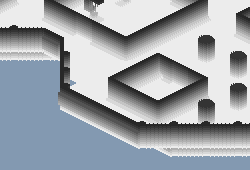 Just to point out, the reason why you can see into a UFO in certain situations is because the game is using the wrong LineOfFire (LOF) templates. Specifically, the floor and ceiling tiles need to use a longer LOFT so that it butts up to the wall properly. Bomb Bloke and myself fixed the Lightning using longer templates for the floor and tests reveal that there are no LOFT issues with this craft anymore. This is just a bug and I don't really think it deserves it's own page. --Zombie 23:40, 7 November 2008 (CST)