81 / 51h: Firing Accuracy experience counter, for number of hits on an enemy (lethal or not, grenades or bullets).

So if I understand this correctly, going on missions and making kills won't get you a promotion on their own, but they'll help ensure a better rank when the soldier eventually does qualify? And likewise, if two soldiers have equal scores for actions performed, their vitalstatistics will effectively be used as a potential tie-breaker?

In that case, the first promoted soldier will very likely be the strongest who performed any action in the first mission, I suppose. The action counts would be too low to have an effect that early on.

Or are you talking about how much their vitalstats have increased by?

I don't suppose you can tell if certain scores are worth more then others? Or are all values just added together for the final score?

Zombie made an observation here that when dealing with high troop counts, not all soldier will become squaddies - If I'm counting right, he must've ended up with something like over a hundred rookies with combat experience. See anything concerning that?

Here is the complete score calculation. It is not based only on the "increased" part, but on the total stats. Performed action are not taken into account (except that more actions = more increase in stats): 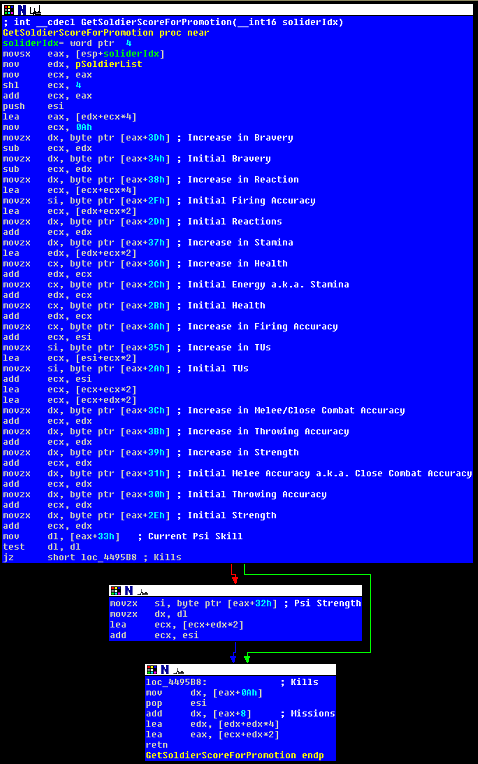 Here is the squaddie promotion part: 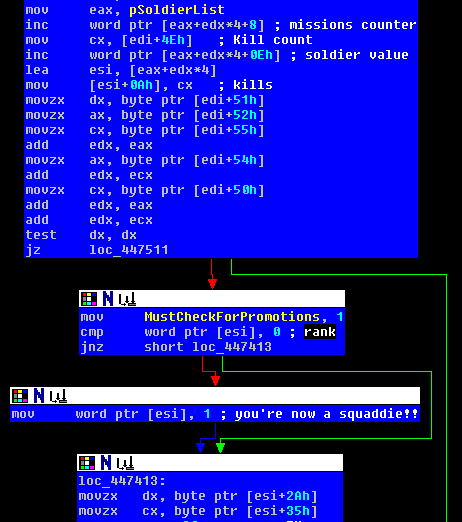 At the end of a tactical mission, every entry in unitpos.dat is checked like that (esi points to the solider.dat entry, edi to the unitref.dat). In contrast the final promotion check is done on the whole soldier.dat array (250 entries), but only if MustCheckForPromotions is set to 1. Seb76 12:54, 17 June 2008 (PDT)