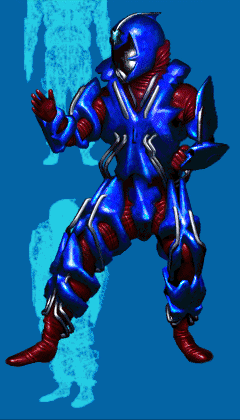 An X-COM/Alien hybrid armor suit which is available only after the necessary research has been completed. Usually this will happen mid to late game, as the prerequisites are Small Disruption Shield, Disruptor Gun and Personal Disruptor Shield. The research project is itself long and will take several days even with a fully staffed Advanced Quantum Physics Lab. X-COM engineers must manufacture this suit in pieces.

The armor is amazingly light and will provide a considerable increase in speed compared to conventional armor. It has exceptional high explosive defence, and the chest piece is so effective that it can be considered to outclass the benefits of flight afforded by Marsec Armor. Disruptor Armor is nigh-impervious to human tech and most basic alien weapons, only becoming vulnerable through repeated armor damage from dozens of hits. A couple Popper blasts and a dozen Hyperworm shots won't phase a fully suited agent, and it can safely absorb multiple shots from the Devastator Cannon as well. Agents still have to be wary of direct hits from Vortex Mines, and the armor will not save agents from Brainsucker attacks. Indeed one of the biggest downfalls of Disruptor Armor is having to take down an alien-controlled agent wearing it!

Like all equipment, Disruptor Armor is extremely vulnerable to shots from the Entropy Launcher and will disintegrate in a few hits. In Real Time the combined durability of a full suit can withstand one missile without disintegrating. However the armor will be severely damaged and will not survive another missile. Real Time agents can drop their armor and let the effect wear off, but Turn Based agents should wear Personal Shields just in case.