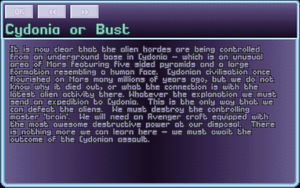 It is now clear that the Alien hordes are being controlled from an underground base in Cydonia - which is an unusual area of Mars featuring five-sided pyramids and a large formation resembling a human face. Cydonian civilisation once flourished on Mars many millions of years ago, but we do not know why it died out, or what the connection is with the latest Alien activity there. Whatever the explanation, we must send an expedition to Cydonia. This is the only way that we can defeat the aliens. We must destroy the controlling master 'Brain'. We will need an Avenger craft equipped with the most awesome destructive power at our disposal. There is nothing more we can learn here - we must await the outcome of the Cydonian assault.

This research item becomes available after first researching The Martian Solution, then interrogating a live Alien Commander. Any Commanders "researched" prior to coming up with the Martian Solution will not contribute to the availability of the Cydonia project.