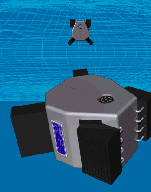 A Weapon Control Module can give extra accuracy to guided projectiles. The space requirement for the advanced weapon control is 2x2, so it's best suited for large vehicles.

This is the most effective control system available and outclasses all previous modules when stacked as well. It's the best one to use on the Hovercar and its limited slots.

Weapon Control Modules are possibly "less effective" with beam and projectile weapons as, even though the accuracy is increased, your craft will usually not aim ahead but shoot at the current position of the UFO, therefore the shot will most of the time miss unless you position your craft correctly instead of just giving them the target command and letting them do their own thing. Either that, or the craft will try to fire at the spot that the UFO will be "if it keeps going in a straight line". I have managed to land quite a number of long distance shots on moving UFOs in the alien dimension. ... within the confines of the cityscape however, UFOs will almost always make multiple turns and erratic movements, which will throw off shots.

However, once in the correct position, the Weapon Control Module will be able to minimize stray shots that level the city, as long as you are not on the highest altitude shooting downwards. In combination with a Stasis Bomb this effect is immensly increased as well.

It also makes the Manual Craft Control (press M) more accurate on the beam and projectile weapons, allowing you to destroy downed UFOs without missing a shot and hitting the ground or a nearby building, which would reduce relations to the organization owning the property. Or allow you to properly only destroy a certain building without a stray shot hitting a different organizations property.

On missile weapons the effect is similar, by providing a more accurate initial shot it reduces the chance of the homing missile having to turn around to hit the UFO.

The fractions are rounded down to an integer. If mixing weapon control sizes, the larger sizes are considered first in the formula.

In short, the more modules of the same type that are installed beyond the first 2 reduce the overall effectiveness of the accuracy boost.

Active cloaking fields appear to reduce FINAL accuracy by a large amount, similiar to the Personal Cloaking Field. Even craft with massive amounts of stacked Advanced Control Systems will fire wild shots when trying to hit a cloaked Escort Ship.