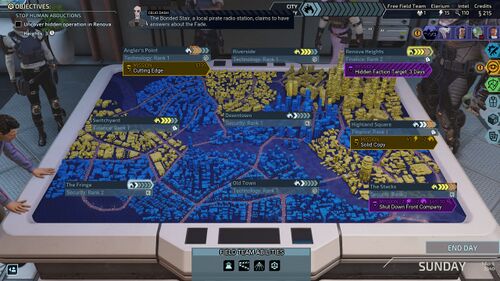 On the city map, you can choose the Main Missions (purple color), Side Missions (yellow color) and Situations (blue color). Additionally, you can recruit Field Teams for individual Districts. This gives you the increase in resources and the ability to use special actions on the map screen. For more information, see Field Teams.

The APC (Armored Personal Carrier) has 4 slots. Unless all four are occupied by agents, no mission can be started. This vehicle transports the four agents to and from Missions.

Completing Missions advances time by 1 day. You can also advance time without completing a mission by clicking on the END DAY button (for example if you prefer agents to complete other duties), but it is not recommended, as Unrest may rise quickly.

These are story missions, that is, those related to investigating and cracking down on hostile Factions operating in City 31.

The first group of Investigation Missions (Hidden Target Missions) is those related to important progress points in the Investigation. They are always initially unavailable and you have to wait a few days first. An additional complication is that the level of Unrest in the District associated with this type of mission increases every day. There is always one such Mission per Operation. Completing it completes the Operation as well.

The second group of Investigation Missions is Lead Missions. Completing them not only allows you to deal another blow to the enemy Faction, but also reduce the wait time to unlock the main mission. These are optional.

Side missions are completely optional. You don't have to complete them to make progress in the main story. The main motivation for starting Side Missions is the rewards associated with them. In addition to some Resources or other rewards, they also always reduce Unrest at the District in which they are completed.

Emergency missions appear only in critical situations, specifically in those Districts where Unrest level has reached the maximum 5 point. They require your immediate attention, since they must be completed in the current day.

Situations don't require direct participation. Once a Situation has been selected and accepted, it will be completed automatically; the APC with a team reaches the destination and solves the problem. They provide rewards similar to Side Missions.

The city itself is broken up into nine different districts including The Stacks, Downtown, Old Town, Angler's Point, Switchyard, The Fringe, Riverside, Renova Heights, and Highland Square. You have to take care of and mitigate Unrest in each of them. If Unrest reaches the highest 5/5 level in a given District, then City 31's Anarchy bar will fill up by 1 point every day.

Districts on the map are color-coded:

The Stacks make the building blocks for the new world, whether it's the terrocrete foam essential to rapid construction, the vertical farm enclosures for extraterrestrial crops, or the revolutionary androids made exclusively in City 31.

Locals say that the best jobs are in the Stacks, working in manufacturing that 'makes a difference.'

The Starport is also located Downtown.

Due to its geography, Angler's Point was the best part of the city during the ADVENT occupation. When food was short, one could catch dinner from the river. It felt open, even though the city wall was always visible. ADVENT patrols were rare, as it was too centrally located for The Resistance to attack it, as well.

Home to an Andromedon Sanctuary, which, as of October 2039, had consistent sounds of weapons fire coming from within.

The "Bugtown Massacre" occurred there during the Occupation; an enormous number of Chryssalids were unleashed on the district, killing many of the inhabitants.

A major transport hub and train depot. Day and night, ADVENT trains crossed through the Switchyard during the war.

Many citizens were forcibly housed in cramped old world buildings in The Fringe. After the War, its refugees took the homes and residences in the advanced and luxurious Highland Square district. Many ADVENT collaborators and troopers were, in turn, forced to live in The Fringe after peace treaties freed them from detention camps.

City 31's "Most Popular Distrct" according to What's Fun, 31? and a former propaganda site. Riverside locals were supportive of ADVENT from early in the occupation.

The district has been recently renovated. Riverboat dinner cruises, historic shops dating back to 2012, and over a dozen nightclubs.

Formerly called "Shankville," Renova Heights was outside the ADVENT security wall. After the war, the City Council leaved the place and built something new. In just two years, Renova was completely renovated. Integrated vertical farms, essential services, and autonomously powered. It's the "crown jewel" of City 31.

It's expensive to live there.

Before the Occupation, The Square was full of shops "selling the kinds of thinks that don't matter anymore". It was converted to housing during the Occupation. ADVENT collaborators and troopers lived in Highland Square, and after the War ended, many of the homes were vacated, their residents forced back into The Fringe. After the War, it was given a modern spin on the old idea, and is now filled with shops of Old World memorobilia, Sectoid kibble, and various clothing lines. Most of the goods are all locally made. The Square has access to both local and regional travel, home to high-speed rail and transport options.

City 31 is a former ADVENT city center that has been turned into the first beacon of coexistence between humanity and the species that once constituted the forces of the Elders. Humans, hybrids, and many different alien species call this city home. A short time after the war, City 31 hired the Shrike resistance cell to act as peacekeepers when it was a purely human population. When their former enemies were allowed sanctuary there, Shrike left the city. Some recent events of City 31 include the Bugtown Massacre, a massive attack by hostile Chryssalids later linked to the activities of Sacred Coil leader Bellus Mar that gave reason for the Reclamation Agency to recruit Axiom into its ranks, and the assassination of Mayor Nightingale, the catalyst for the conflict against such criminal factions as Gray Phoenix, Sacred Coil, and The Progeny.

City 31 is known to manufacture Androids, which exist to perform essential and menial labor. Companies like The Momentum Foundation work on these Androids.