From UFOpaedia
(Redirected from Lift)
Jump to navigation Jump to search

The Access Lift is the first facility you get to place in every new base, with the exception of the default base. Its construction is instantaneous so you can start building four new facilities off it right away.

The Access Lift is also one of the two entry points aliens can take to get into the base, the other being the Hangar. It is impossible to destroy during combat, so it's safe to shell it with as many explosives as you wish in order to defend from any invaders.

This base facility appears in UFO: Enemy Unknown. For the Terror from the Deep equivalent, refer to the Air-Lock. 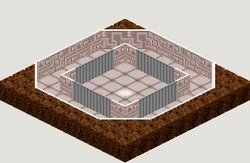 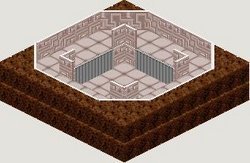 The cost of an Access Lift is included in the cost of a new base. This cost is variable, depending on the Geoscape location:

To fully dismantle a base, you must first remove everything, from equipment, to vehicles, to staff and to base modules. Until the Access Lift is on its own, the base cannot be dismantled.

If you only have one base left, you can indeed dismantle it down to the Access Lift and remove the base of the map. Don't worry, you won't lose the game. As long as you have enough money, you can relocate elsewhere and start afresh.

Do NOT dismantle your base completely if you are being targeted by one or more retaliation teams. The game will crash if the Battleship dropship is not able to find a base.

If this is not your last base, consider instead leaving the access lift behind. Losing a base without putting up a fight costs you nothing, and as removing modules get you nothing (besides a maintenance cost bug), it's a fair deal.

If this is your last base, immediately build a new access lift elsewhere and let the battleship take the old access lift. At this point it may be better to start a new game, but if you are adamant and wish to continue hanging on, this is the only way to do it. Just be sure you have enough money to rebuild your base up to the point where you can send a Skyranger and a squad of armed soldiers to deal with ground missions.