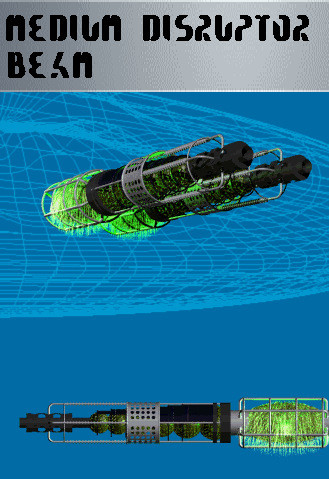 The Medium Disruptor Beam is the second of the vehicle disruptor weapons. It is one of the more useful and perhaps the most popular of the three types of aircraft disruptor beams. Medium Disruptors will often make up the majority of the weapons armed on all interceptors towards the final stages of the game. They are also one of the vital components necessary for X-COM Disruptor Armor research.

Medium Disruptors offer twice the firepower and range of the Light Disruptor Beam and are strong enough to pierce the hulls of the Battleship and Mothership. As per the norm with all disruptor technology, they are powered by drawing energy from the Alien Dimension and thus do not need ammunition.

Additionally, they can be mounted onto a wide variety of combat aircraft. The size of a Medium Disruptor Beam is fairly bulky at 2×3 slots. For the conventional aircraft this means that only the Hawk Air Warrior can mount this weapon. All X-COM Hybrid Aircraft from the Explorer up to the Annihilator can arm Medium Disruptors.

Medium Disruptor beams are commonly found on the Alien Assault Ship, and Alien Fast-Attack Ship which are amongst the most straightforward of the UFOs to capture. It is highly recommended that these ships are shot down and captured as soon as and as often as reasonably possible.