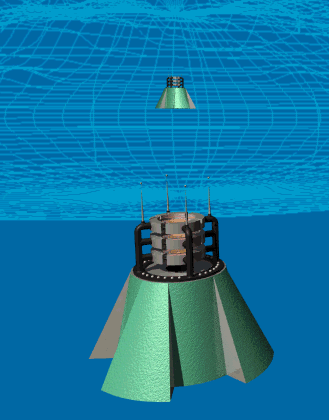 The Small Disruptor Shield, image from the UFOpaedia

The small disruption shield is the most popular of the two varieties of shields as it is the most compact and will fit on many ships, including earlier aircraft like the hovercars. Its size is also shared by very many other useful optional vehicle modifications such as the two largest accuracy modifiers, Missile Evasion Matrix and even the Teleporter. This means that if you have sudden need of any one of these modifications, it can be added by simply swapping out one shield.

Arming a vehicle with shields, even if it's only one, will bring a whole new level of air combat to the playing field. Ships will be able to rush into combat, sustain a few hits, retreat, recharge and then fly back into the fray over and over again, meaning less downtime in the repair bay. Or even if the ships need a lot of time in the repair bay, fully charged shields can give them a temporary lease of life so that they can attend to an air skirmish - as long as the shields hold out.

Bear in mind that a newly bolted on shield will always be empty, so you cannot simply put on a new shield in the middle of a battle. You have to let the ship have some time to replenish its shield.

Finally, while shields can be mounted on some ground vehicles, destruction of the road underneath the vehicle will render the shield's benefits completely useless.

Vehicle shields differ from the hand-held shields in that energy bar for all the shields mounted onto the vehicle will combine into a single bar. This has the advantage that you won't lose the individual shields as their hit points get used up.

The disadvantage to the combined energy bar is that once the entire shield bar is depleted, all of the shields are destroyed at once.

Small disruption shields recharge at a rate of one shield unit per second, thus requiring 200 seconds (3 minutes, 20 seconds) to charge fully after putting them on a vehicle. The shields do act independently, so if you place 8 small disruption shields on a biotrans, its shielding will regenerate at a rate of 8 points per second. This can make the craft very difficult to destroy.

I have not tested the rate of recharge of the large disruption shield.

I also noted that the craft sustained about the same damage per hit when shielded as it did when the shields dropped; that being a light disrupter beam in both cases, doing 8-20 damage per hit. This could mean that your craft retain their armor value through the shields. The alien ships seem to not retain their armor through the shields, as you can always take the shields down quickly with weak weapons like bolter laser guns or auto-cannons, but many alien craft won't take any damage at all from these weapons after the shields are down. The Reaver of Darkness 02:04 Jul 24 2010

Shields have no armor rating, which is plainly visible against massive UFOs. Light weapons will shred the shield quickly, while dealing virtually no damage to its hull.