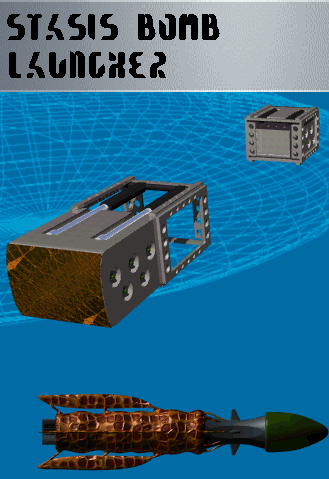 An alien missile launcher that fires missiles that create a stasis field upon impact that immobilizes the target.

The field causes the target to become "frozen" for a few seconds, making the target very vulnerable to incoming fire and unable to avoid any attacks until the field breaks down. Frozen targets appear pale for the duration of the stasis field.

While the missile might not be able to track the most agile targets it is a severe threat to anything cumbersome enough not able to dodge the missiles.

Note that the stasis field effect is not cumulative. Attacking with another missile immediately after freezing the target will only result in wasting a missile.

Although an X-COM ship can be momentarily immobilized if caught in a stasis field, the ship's on-board manual fire control system can be remotely manned by the X-COM commander in place of the ship AI until its mobility is restored.

Ship AI for both the aliens and X-COM treat the stasis bomb launcher in the same way as ordinary missile launchers and will continue firing missiles even when the target is frozen.

In the case of the UFOs, as their ammunition is arguably unlimited, this is not a problem. For X-COM controlled ships, the limited amount of ammunition means that the AI will waste most of the missile on an already frozen target.

Short of using manual control or redirecting the focus of the ship onto another target, the best way to work around this is to order ships carrying stasis bomb launchers to have the corresponding weapon hard points switched off by default.

When the missile is needed, manually issue the order to launch by switching the hard-point on momentarily and then switching it off again once the missile has been launched.