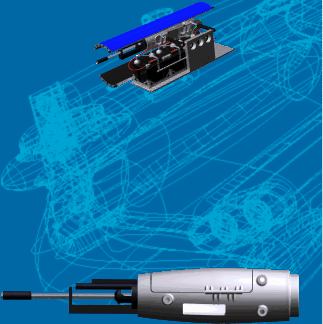 The Bolter 4000 Laser Gun, image from the UFOpaedia

The Bolter 4000 Laser Gun is a mid-powered laser beam gun. This weapon is reasonably priced and never needs to be reloaded making it inexpensive to use and thus very suitable for the beginning stages of the game when the budget is still small, enemies are still weak and selection of armament still limited. It is ideal for general air combat without having to worry about dealing massive damage to the city when shots are misfired, or if you want to reduce the micromanagement involved in maintaining your ammunition supplies for large squards of small vehicles.

This weapon is well suited for Hoverbikes and Hovercars but not so much for the Valkyrie Interceptor or the Hawk Air Warrior which can be fitted with the larger and more powerful version, the Lancer 7000 Laser Gun.

Rendor Plasma Gun is a powerful alternative for this weapon, as mentioned in UFOpaedia. But the Bolter 4000 Laser Gun has the same size as the Lineage Plasma Cannon, the most powerful conventional beam weapon in the game.

This weapon is a standard issue weapon on all new Phoenix Hovercars and Police Hovercars.

"Mid-powered Laser Beam gun commonly used in airborne police vehicles. The atomic power cells contained in these weapons allow for many thousands of shots before they expire."