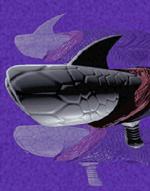 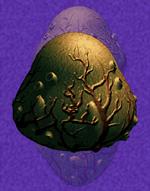 This exotic weapon is commonly the first piece of alien technology recovered by X-Com. An oddly shaped apparatus which launches Brainsucker Pods in a wildly inaccurate arcing trajectory. Once researched, this weapon can be sold but since it is useless, its sale price is very low. Pods recovered cannot be sold since they are classed as alien lifeforms and cannot be bought. This weapon and pods are used only by aliens against humans or human hybrids.
Pods can be picked up on the battlescape (since it is an item and not a lifeform, yet) and thrown, or fired from the launcher once researched, to cautiously allow unhatched pods to break open which can then be used to gain some combat experience. Any remaining in your agent's inventory will be discarded at mission end unless a bio-transport module is available.
Android X-Com agents will not cause the pod to hatch, be targeted by a live brainsucker nor will they be fired upon by aliens which carry this weapon.
Pods will only break open if there is room for the brainsucker to appear on the battlescape and if there is a reason to do so (human hosts are near). A loaded launcher will not allow a pod to hatch. Any unconscious anthropod or skeletoid with loose pods in their inventory will not allow their 'ammunition' to hatch, but loose brainsucker pods on any dead alien may do so if approached by any human (including security and civilians) or hybrid.