Though listed simply as "Elerium" in the UFOpaedia, Elerium exists ingame only as Elerium Pods and Elerium 115.

Elerium 115 is used as ammunition for craft weapons, specifically the Rendor Plasma Gun, Lineage Plasma Cannon and Plasma Multi-System. It can be purchased on the market and has no image of its own.

Elerium Pods are found in the battlescape while raiding corporate buildings such as slums and large flyer factories. However, at the end of combat, Elerium Pods will be broken down to 150 units of Elerium-115, and carried as cargo rather than by the agent who initially picked it up. At base price, the value of one Elerium Pod is therefore $3,000. This also means that the craft on site requires a non-zero cargo capacity for looting Elerium to be worthwhile. 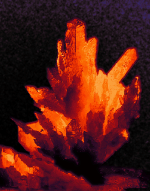 "Since its introduction during the first Alien invasion, Elerium has proved to be an essential power source for interplanetary travel and military use. It is mined from distant planetary systems and transported back to Earth where its rarity ensures a high price. Tiny quantities contained in small pods fetch a high price. Corporations store pods in preference to gold because the stability of its value is guaranteed."