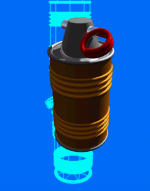 A basic incendiary grenade able to engulf an entity in flames which does damage over time. A fire started on something flammable will spread until it burns itself out, will cause explosives and ammunition to detonate (cook-off), destroy most items it passes over, will immediately cause any unit to run away to escape the flames and smoke, and may cause extensive damage to a building on the battlescape if ignored. Slow, or trapped, or static entities (eg: stunned) will be slow-roasted. Fire and flames will produce thick smoke closest to the source. Any fire can be extinguished with a gas effect grenade, or a fire-break can be made with explosives.