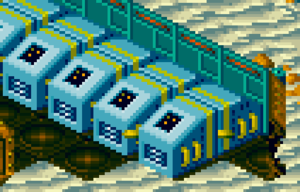 A row of Accelerators, some with Zrbite crystals sitting on them.

Ion Beam Accelerators (often abbreviated IBAs) are the engines for propulsion of all Alien craft. Unless shot down, expect to always see one on every enemy sub. They can also be found stored in the interior evirons of an Alien Colony. Ion Beam Accelerators are a crucial component for researching and producing advanced submarines and Ion Armor.

Some Ion Beam Accelerators contain Zrbite clusters that are worth 50 units of Zrbite. Identifiable by a yellow bar/ovoid superimposed over the southeast wall of the Ion Beam Accelerator. Basically, the IBA is a tile, the Zrbite is an object, so the object (Zrbite) will appear on top of the tile (IBA). Ion Beam Accelerators explode when damaged; and being the the only means of obtaining Zrbite, try not destroy these just to kill nearby aliens. IBAs explode when damaged in an unusual pattern: They have a very small blast radius, but the force of the explosion is strong enough to destroy an Alien Sub's outer hull, and yet can leave an aquanaut standing next to the IBA unharmed from the blast.

This item appears in Terror from the Deep. For the UFO: Enemy Unknown equivalent, refer to UFO Power Source.