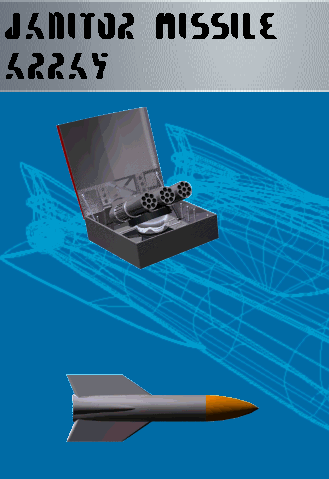 The key distinguishing feature of the Janitor Missile Array is its high ammunition storage, which allows vehicles to participate in extended air skirmishes. Its compact small size allows it to be fitted onto almost any aircraft, making it a great swarm weapon. The primary downsides are with ammo costs and raw damage output. Buying up ammunition stocks can cost over $10000 per week, and it has trouble bringing down larger UFOs. It is however one of the best options to take down light UFOs at the start of the game.

Like all missile projectiles, Janitor Missiles can home in on their targets, making them excellent against small and agile craft. Note that the missiles will not home in on a UFO with an active Cloaking Field.