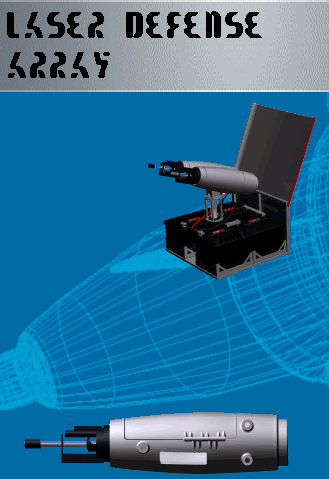 This weapon is a anti-missile defense system. It does not fire on hostile crafts and does not use ammunition.

The Laser Defense Array will automatically attempt to destroy incoming missiles. Unfortunately, it rarely does enough damage to the missiles to destroy them unless a Missile Evasion Matrix is active or additional arrays are present. All defense arrays have a complete circle firing arc, allowing them to fire at missiles in any direction.

Laser Defense Arrays cannot be mounted on ground vehicles and must be mounted on a ship with a sufficiently large weapon hardpoint. Due to its awkward shape and size, only Hawk Air Warrior or X-COM hybrid aircraft are capable of mounting them.

The defense arrays unfortunately have one major drawback. Unless mounted onto a ship that's dedicated purely for anti-missile countermeasures, each turret will seriously affect a ships firepower.

Defense arrays normally only target missiles, however they can be turned against enemy targets when fired on manual control. The attacks do not do much damage individually, but the rapid rate of fire and circular firing arc compensates for this. UFOs with thick hulls such as the two capital ships cannot be harmed by the weak attacks, but disruptor shields, weaker UFOs and conventional enemy aircraft will sustain considerable damage.