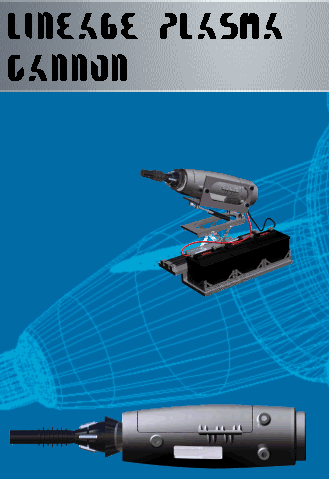 The Lineage Plasma Cannon is quite a powerful yet compact weapon, and one of the few conventional weapons capable of threatening the heaviest UFOs. It can fit on most vehicles, including the Hoverbike and the Phoenix. This weapon is fueled by Elerium and is the most cost-effective Elerium-powered flying vehicle weapon. (The Griffin's Plasma Mounted Cannon is theoratically better, but the all road vehicles are terrible) It is a heavier equivalent of the Lancer 7000 Laser Gun for arming aircraft.

While a Hawk Air Warrior equipped with three Lineage Cannons can prove sufficiently powerful to take down a mid-tier alien craft, its indisputable biggest weakness comes from the weapon's long range. Ironically, its impressive range causes the weapon to start firing long before it has a chance of hitting the enemy. It will regularly succeed in doing ten times more damage to the city than the aliens if not handled carefully, along with wasting precious Elerium ammo in the process.

The best option is to only use them up close. The procedure used to conserve the use of the Stasis Bomb Launcher can be used here: disable the hardpoints mounted with Lineage Cannons, get in close, then re-enable the cannons and hit the UFO at close range.