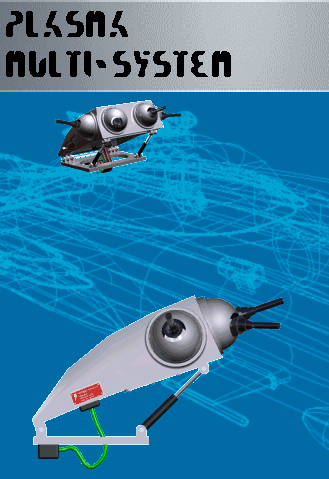 Ammunition loaded into weapons is weightless.

The Plasma Multi-System is a box shaped weapon with mini-turrets sticking out of it at all angles that can inflict average damage. Its use is limited to fighting weaker enemy vehicles such as Hoverbikes, Hovercars or the earlier medium class UFOs. Its only major drawback is its reliance on Elerium for fuel.

The Plasma Multi-System's main gimmick and attraction is its wide firing arc. While not as impressive as the arc on the anti-missile defense guns, it can fire in almost any direction. This is a desireable trait that compensates for the depressingly slow turn rates of some ships such as the Hawk Air Warrior. This allows these slow lumbering hulks to continue firing at the UFOs while turning.

The Hawk is coincidentally the only purchaseable air ship that can mount it. Hybrid X-COM aircraft such as the Dimension Probe, Bio-Trans and beyond can easily mount the plasma multi-system, although advent of the ammo-less disruptor technology leaves the multi-system obsolete.

The UFOPaedia picture shows the multi-system installed inside a Hovercar's equipment slot. Perhaps the weapon had different designs as a replacement for other equipment modules, where it would have had a niche use. Unfortunately the weapon's awkward size, low damage and limited ammo capacity render the multi-system effectively useless the instant it is available.