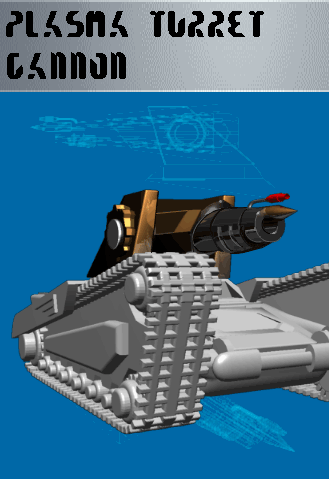 Note: the UFOpaedia image (right) is an error. A Rumble Cannon is shown in-game. The Equip Screen image (left) is correct and shows a Plasma Turret Cannon.

The Plasma Turret Cannon is the most accurate and powerful single-shot tank-mounted weapon in Mega-Primus. It has the greatest range of all the ground based weapons. It is powered by a generous amount of Elerium, allowing it to weather through most UFO incursions.

The Plasma Turret Cannon suffers many of the downsides that cripple the Rumble Cannon. Its long range is nearly useless because Apocalypse does not lead targets, so most UFOs will be able to evade nearly all of its attacks. However the turret can swivel 270 degrees vs. the Rumble Cannon's tiny arc, giving the tank much more freedom to engage its targets. Commanders will still need to place their tanks around the city to maximize the chance of any one tank getting a good position, and must be wary of potential city damage from missed shots.

The Plasma Cannon excels when directed against the largest UFOs, the Battleship and Mothership. It easily tears through their heavy armor, and can hit fairly well at long range. With a good line of fire even one tank can deal some of the best damage possible from conventional weapons. Commanders looking to use tanks against smaller UFOs are better off using the more reliable GLM Air Defense for its target seeking ability.

Ironically, one of the Cannon's biggest downsides is its incredibly large Elerium-115 ammo supply. One load of ammo is FAR more than a tank will ever need, and losing a tank will set you back a huge amount of Elerium. Commanders will have to choose between arming more tanks with Plasma Cannons, or saving ammo for their aircraft plasma weapons. It is recommended that once deployed, you never let the tank return to base to reload as it will have more than enough ammo for the entire game.