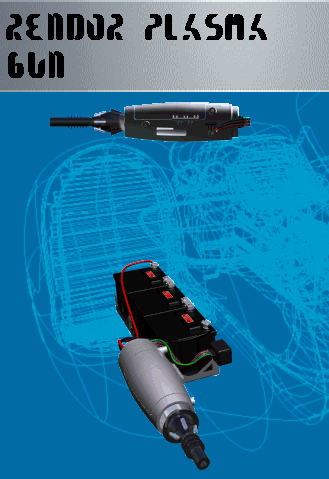 The Rendor Plasma Gun is a popular but expensive alternative to the Bolter 4000 Laser Gun. This weapon inflicts reasonably good damage and its small size makes it possible to fit it on all vehicles. The main drawback is that this weapon is powered by Elerium. Though not as scarce as the original Elerium collected in the first alien war, the stocks are still limited.

It is a favourite weapon to arm small vehicles such as Hoverbikes that still packs a reasonable stopping power without the hefty price tag of the Lineage Plasma Cannon. Bear in mind that the Rendor can tear weaker alien craft to shreds, leaving nothing for X-COM to retrieve. Multiple craft using these weapons can go through a lot of Elerium, which might be better saved until sturdier opponents appear.

There is an error in the vehicle arming screen with the reported amount of ammunition that a Rendor can hold.

The ammo capacity shows that it can store 70 rounds. This is not correct as a Rendor is able to store 140 shots. This is the same amount of Elerium that is removed from storage to fill up a Rendor, indicating that each beam from a Rendor is worth 1 unit of Elerium. The ammo count is deducted by 1 point for every two shots fired. This means the ammo display is halved.